Report on the Anniversary Match

One hundred and thirty five players assembled at the Hall School Saturday16th September to celebrate the Southern Counties Chess Union’s 125th anniversary of organising chess in the South of England.

Proceedings opened with SCCU President, Julie Denning, welcoming the assembly of Past Presidents and players, and continued by remarking on the longevity and success of County Chess in the Southern Union spanning the length of the River Thames and beyond; and which, at greatest extent, comprised Cornwall on the West coast through to Norfolk on the East coast. 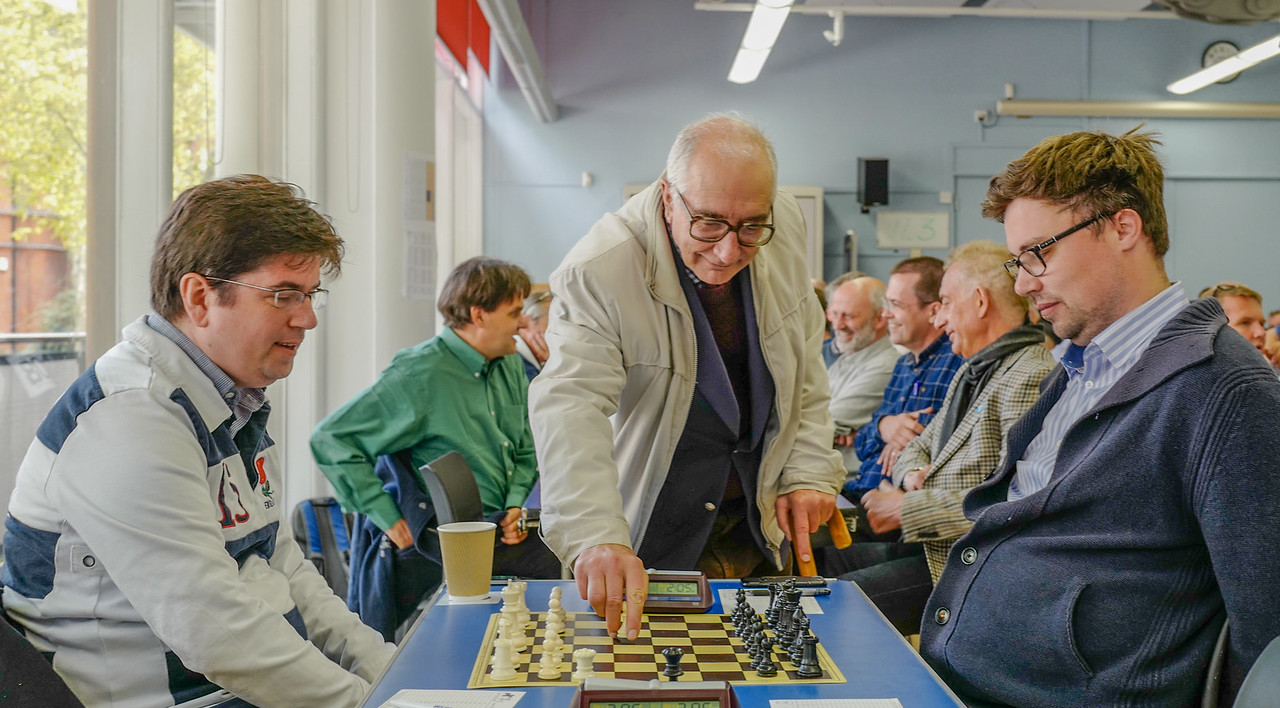 The match itself began shortly after 1:45pm with Life Vice President Martin Cath making the opening move on the board of the top rated players, IM Richard Bates (South of the Thames) and GM Jonathan Hawkins (North of the Thames). South had won the toss and took White on odd numbered boards.

In a surprise twist to proceedings the eight attending current and past SCCU Presidents were paired in a North v South mini-match. Tim Thurston, David Smith, Chris Majer and Ron Brown for the North had the grading advantage over David Sedgwick, Julie Denning, Mike Gunn and David Howes for the South. However, it was the South Presidents who prevailed with David Howes gaining the only decisive result by converting his rook and pawn ending on the stroke of 5:30pm.

Chess players from 15 past and present SCCU counties took part in the event, spanning the South of England from Devon to Norfolk. Oxfordshire and Berkshire representatives were reassigned to team South to even out the numbers. Middlesex and Surrey not surprisingly provided the largest contingents as they did back in 1921. It was Norfolk however that had the best county performance among the counties with multiple representatives with a 75% success rate. You can view the results by County as the match happened but here is my overview.

John McDonald scored the first win of the match as early as 2:23pm, which gave team North an early initiative as their lead fluctuated between 1 and 2 points. Graham Alcock and David Gilbert did the double over Essex at 3:40pm to clear the deficit and may even have held the lead for a moment depending on the order of finishes for the 3 results reported at this time. Within minutes Essex had struck back to take the lead again through U180 match skip, Gavin Hughes. Once again team North’s lead fluctuated between 1 and 2 points before Efe Shimwell a talented blind junior levelled the scores once more for Team South at 3:55pm. Parity restored but again short lived.

For the rest of the afternoon team North held the ascendency (the Presidents match aside) and by mid afternoon after 3 hours play had established their biggest lead of 8 points with just over half the results in.

The first Guideline 111.4 switch to 5 second increments occurred at 4:20pm with IM Jack Rudd, all the way from Somerset, living up to his Speedy Gonzales reputation, forcing his opponent, Carsten Pedersen, onto increments.

By 5:30pm there were still 25% of games still in play, a sign of the competitiveness of the match notwithstanding the festive atmosphere.

With just under 4 hours play Team South had narrowed the gap to a deficit of two with 6 games outstanding and going down to the wire. Team North though held its nerve with Essex’s blind player Voldi Gailans sealing the win to take North to the cusp of victory, 4 up with 4 to play going into the final minutes of the match. A draw sealed the match for Team North who also scored two further wins though it was Team South that won the final game of the day to finish just 5 points adrift. Final score 36½ - 31½. Average team grades: North 147 and South 148.

Matches over a large number of boards are few and far between, as are matches that are representative of all ages and abilities, as this one was. My inspiration for the event was the 400 board 1921 SCCU North v South of the River Thames match. The South had the better of the top 200 boards but the strength in depth of the North side led to a significant winning margin of 217½ to 182½. Anthony Fulton has taken a look back into time to provide the historical context for and a report of the 1921 match taken from the Middlesex County archives along with the individual scores.

As skipper for the South, Mike Gunn, quipped at least the gap has been narrowed!

For me the highlight of the day was walking into The Swiss Cottage public house, a somewhat large and sprawling establishment, at the end of a long day to find chess players everywhere at home with old and new friends alike. There is more to chess.